*As seen in the summer issue of Comboni Missions

The Hard Road Back

For Returned Missionaries, Home Is a New Assignment 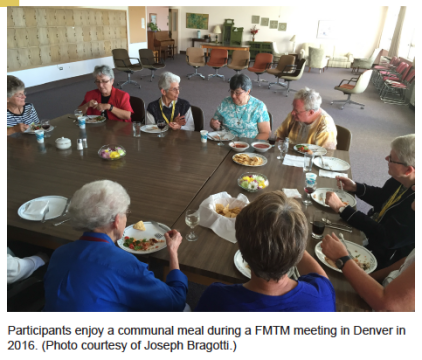 One September I traveled to Denver to spend ten days with a group of priests, religious, and laypeople with whom I share a common life experience. We were all missionaries who served abroad and then “returned home.”

Well, you may say, what’s the big deal about returning home? And I say: It’s a bigger deal than the process of actually “going to the missions”! Let me explain.

It has been said that you never return home, but rather you rediscover home. It’s a shock and there is a name for it: counter-culture shock (CCS for short). The folks I met with in Denver were having a serious case of it. To make things worse, many of us witnessed enough violence to give us at least a minor case of PTSD.

Let me describe to you some of the symptoms of CCS.

I returned to Cincinnati with the bare minimum. After all, I was returning to the land of plenty. So the next day I went to the mall. I spent most of the morning there and…bought nothing. I was overwhelmed by the variety of choices, by the abundance of everything. How could I possibly pick a shirt, a sweater, or anything out of a thousand? I had to go back with a friend the next day.

I stopped at a gas station to fill up. Surprise! Gone were the attendants. They had the do-it-yourself thing now. I parked in a corner and observed customers for a good ten minutes before risking to make a fool of myself.

I visited friends. Grandpa had died and Grandma’s memory was a little blurry. With whom was I going to discuss world problems now? The adorable little kids I once knew had grown into pesky teenagers who hardly gave you the time of day. On the plus side, the pesky teens of years gone by were now reasonably well-adjusted young adults.

On my second mission tour I spent five years surrounded by indescribable violence. Safely back here, friends took me to a huge fireworks show. I hated it. Bang-bang noises made me jumpy and zip-zip noises made me want to duck. I still don’t particularly enjoy hearing fireworks, if I can’t see them. And I hated military uniforms with an irrational passion. I had my own near-death encounters with them and saw the mayhem, destruction and horror they left behind wherever they interacted with local people.

Returned missionaries face a lot of disappointments. We have stories to tell about the wonderful people we lived with, about the plight of the poor and the dispossessed, how they cope and survive, about what makes them poor and what could be done about it. Above all, we have stories of faith and hope, stories of human solidarity that defy belief. But most people, even friends, don’t really care that much. You are in the middle of the story and someone calls them on their cell phone. Your saga just went down the tube.

Perhaps you lived in a Church where laypeople are in charge and you are their shepherd, where human touch, friendship, and affection are the rule, where everyone knows everyone, where anyone who wants to talk to “father” gets to talk to father. And now you are back in a stiff medieval Church run by clerics, stuck in a mega parish where you have to dial six digits before you can talk to a human being.

Add to this the inevitable hurts of living anywhere —mission lands included. Add your own doubts and fears. The picture is rather dismal.

So it was that in the early 1980s a group of missionaries decided to do something about it. We founded a group which is now a national Catholic organization called From Mission to Mission (FMTM). As a first step, we devised a ten-day workshop on “Transition: A process of Death and Resurrection.” Experts in psychology, social sciences, and theology are called upon as resources, but they themselves must have been missionaries abroad.

We spend almost two days listening to individual stories. It’s a draining experience where things come out that you never even told your mother (especially your mother!) or your best friend. It is sacred ground where people can make peace with the past. It’s so overwhelming that we take a half-day off, just to catch our breath.

Then come the experts to tell the group where we stand today as a country and as a Church. It’s a primer on social analysis. Finally we bring in resource people who will help our charges figure out how they can redirect their skills and use their past experiences in the here and now.

We want these returned missionaries to contribute their wider worldview to their home Church and society. They are now missionaries to their own people. We like to think of ourselves as the thorn in the side of our society’s and of our Church’s complacency.

That’s what happened in Denver all those years ago, when just two of us “old hands” ran the program with the help of local experts. Now, the organization has grown and adapted to better serve the changing face of mission and to reflect our expertise in dealing with all kinds of transition, not just reentry. No matter how often you do it, every workshop is always a unique experience. Do we have all the answers? No, but we like to think of ourselves as wounded healers. God will do the rest.

Click here to see the original article in PDF.

Published by From Mission to Mission

View all posts by From Mission to Mission

From Mission to Mission assists people in their preparation and processing of their cross-cultural, ministerial, and life transitions to continue their Christian call to mission.